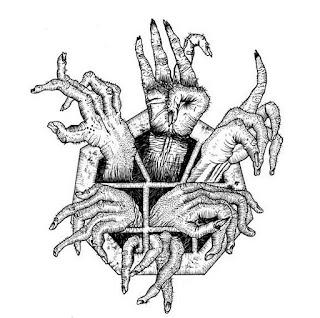 Artist: Destino Final
Album: Atrapados LP
Year: 2009
Label: La Vida Es Un Mus Discos
Tracks:
1. ¿Donde Estan?
2. ¿Qué Vas A Hacer?
3. Atrapados
4. Laberinto I
5. Laberinto II
6. Ahogate
7. Este Dolor
8. Cuenta Atras
9. Volver A Empezar
This LP came out a couple years ago, but I just recently re-discovered how great it is.  Destino Final hails from Spain and, from what I've gathered, was formed by former members of renown Spanish hardcore band Invasión.  Like some other Spanish hardcore bands I've heard, this band has a d-beat vibe, but at the same time they sort of don't. There is some definite Discharge influence, but the band's sound is in no way any sort of crust-rehash.
From the first screech of feedback, this record is totally intense and pulverizing all the way through.  Where I would say Destino Final differs from their contemporaries is that they sometimes deviate from the high-speed, rocked-out d-beat parts in exchange for a brutish, slow pulse that is SUPER tough.  The vocals that soar over-top this straightforward wall of sound are overly reverbed out, providing this washy ambiance over the whole mix.  The difference between the music and the vocals provides a really interesting contrast.  Another reason why this record is so great from start to finish is because of the flow of the tracks. In particular the tracks that sort of run together like Laberinto I and Laberinto II, where part 1 is one of the faster songs on the record and part 2 is this long, drawn out mid-tempo chant that closes the first side of the LP.
I've heard that Destino Final is currently working on a new LP for next year and I'll be excited to see if they can top this one.  But for now, I highly recommend checking this record out.  Also, if you want to get the LP, I'm pretty sure the label still has copies, and also Sorry State still has some in their distro.
La Vida Es Un Mus Discos
Sorry State
Download
-Jeff
Posted by VILE DISCOURSE at 9:41 PM

Email ThisBlogThis!Share to TwitterShare to FacebookShare to Pinterest
Labels: Jeff

VILE DISCOURSE
Vile Discourse was created by two friends in what is an undoubtedly unoriginal, but hopefully relevant highlighting of some underground musical gems in attempt to resist mediocrity and wade through all the bullshit. If you're into the music you download, any feedback in comments is welcomed and appreciated. Also, we hope you'll make an effort afterward to support any active band or a label by buying the record and ESPECIALLY by going to see them at a show. Just about all of the music posted on this blog is ripped from both of our personal record collections. If any bands or labels want us to remove music of theirs that we post, then we completely understand, but please e-mail us at vilediscourse@gmail.com.